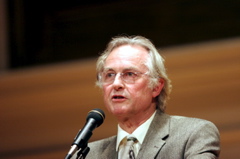 I had the pleasure of going to see Richard Dawkins last night at Cal. Although our fourth-row seating probably influenced my judgement, I must say he is a truly excellent speaker.

I finished his book, The God Delusion several months ago, and I had to agree with a friend who said he was a bit “heavy-handed” in the book. So when I went to see him in person, I expected much the same. I expected him to push me, to drive his point, to be a little bit too aggressive in his delivery. To the contrary though, he is a subtle, interesting, humble, and actually quite a funny speaker.

In his speech, he engaged in “consciousness raising”, which he believes worked for feminism, and which he believes will work for religion. His example was that as a result of feminist consciousness raising, if I say: “All men are created equal”, you might think: “Right, but what about the women?” He wants to apply this tool to religion, so if I say: “A Catholic child”, you think: “Children aren’t Catholics - They’re too young to know where they stand on such issues.”

He believes (and I must agree) that religion in the world has brought much violence and destruction, and that the whole thing could be cut off at the stem if we all realized that our children do not share our religion. I’m simplifying and combining several of his points, but that was really the thrust of his speech. If I am a catholic, that does not make my child a catholic; I a Muslim, does not make my child a Muslim. Etc.

To drive his point home, Dawkins showed a picture that he said he found on the Christmas cover of the UK’s Telegraph Newspaper. In the picture, were three children sitting side by side in costume for some Christmas event (I think they were the three wise men or some such). The idea behind the picture was to depict religious harmony. To quote his book:

At Christmas-time one year my daily newspaper, the Independent, was looking for a seasonal image and found a heart-warmingly ecumenical one at a school nativity play. The Three Wise Men were played by, as the caption glowingly said, Shadbreet (a Sikh), Musharraf (a Muslim) and Adele (a Christian), all aged four. Charming? Heart-warming? No, it is not, it is neither; it is grotesque. […] Imagine an identical photograph, with the caption changed as follows: “Shadbreet (a Keynesian), Musharaff (a Monetarist) and Adele (a Marxist), all aged four.” Wouldn’t this be a candidate for irate letters of protest? It certainly should be.

I can’t say that I’m one to really get “irate” about such things, but he really does have a point. The number of people that grow up to be the same religion as their parents is astounding. How can it be that the religion of all peoples’ parents around the world just happens to be the right one for their children? It defies logic.

So Dawkins believes that if we raise consciousness in a similar way to feminism, and find a way to allow children to be nontheists until they are old enough to make such decisions on their own, we might just be able to beat thi religion thing. We might be able to curb religious violence by allowing children to make their own choices.

It could work, and I for one am officially convinced that I will not let people speak of religious children.